First brew is in the fermenter and I am exhausted.

I chose the Speidel IPA because I love IPAs and I thought it would come with clear instructions to ease into using my new equipment. The instructions with the recipe are quite sparse and even a bit confusing.
How did my brew go? I would say the day was a success. The last time I brewed was 20 years ago using all grain in a single pot on a gas stove. It was messy and hard to maintain temperatures with the end result being drinkable but not good beer. Today was mostly fun and I am sure it will only get better as I improve my process, drag a friend to help out and make sure I have a beer in the fridge.

Thanks for everyone's help.
Top

It took me over 10 brews to get my braumeister properly dialled in to all my numbers etc. I'd say you did good for a first day.
The cooling sounds strange. I never run pumps when cooling as water is pretty cold. Are you sure one of your hop bags was not sitting on the temp probe and impeding its function?
Top

Thanks. I was quite worried about the wort fountains and was going to try to stir my grain to fix the issue but realized getting the top screen off the top was going to be difficult. I'm glad it mostly stopped after the first pump break.

My cooling issue was very likely caused by hop bags. I'm not sure where 2 of them were (besides in the pot) during the cool down.
Top

I run the pump during cooling and it reduces chill time.

The wort fountains were probably caused by either the crush size or a light grain bill.
That and go pellets might have contributed to banging up the pump.

Main thing is you did good, made beer and made yourself smile... Happy days.
Top

... about the fountains ... I read about this in the German HobbyBrauer forum and as a possible solution people have added another extra stainless steel tube to lift the upper sieve to the highest level. This should allow the malt below to have more 'space' and not being condensed by the sieves.
Have made myself these extra tubes as well, but not tested yet and I haven't had any fountains so far ... maybe only lucky as this seems to be a problem for some people.

Hope I could get the idea / 'solution' clear, else please ask.

I've started in September and am set to do my 8th brew on Saturday and still a big learning curve. I've taken advice on here for the IPA I will be doing on Saturday, am going to drop the hops straight in,and just not use the pump when cooling.

Still undecided whether to go for the BM IPA, or the one from Greg Hughes.

I did the Bavaria mandarins ale from BM website. Disappointed , no real hop aroma or bitterness,
Top

Uwe-K wrote:... about the fountains ... I read about this in the German HobbyBrauer forum and as a possible solution people have added another extra stainless steel tube to lift the upper sieve to the highest level.

Just seen the low grain bill. You will get fountains.


A silicone seal around the top holds the plate up too. 15mm copper pipe would work and is easier to get and work with.

But you do need something..
Top

Brew is progressing. It spent a week and a half in the cellar with a heat pad connected to ink-bird for controlled temperature fermentation. Now the carboy is in the frig cold crashing for a few days. Hopefully kegging tomorrow. I'm targeting 0.62bars (9psi) at 4.4C (40F) and the plan is to have the keg sit at 1.5bars (22psi) for the first 24h to speed up the process. 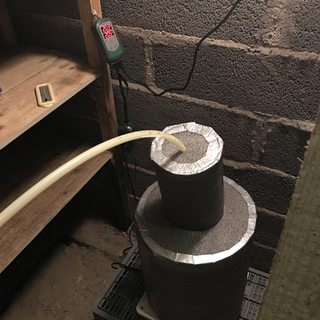 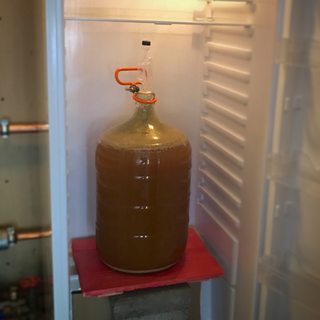 By that I mean 2 weeks fermenting, rack of lees, 2 weeks cold crash and mature. Then 2 weeks priming.
Top

First sample; very good. I can't express how much better this is than what I brewed 20yrs ago.

It was still quite cloudy when I put it to keg so I added one sheet (1tsp) of gelatin. The first glasses were nice and clear but the 4th was again hazy. The carbonation is a little low so I just turned it up a bit but I like low carb beer.

Thinking about what I'll make next. 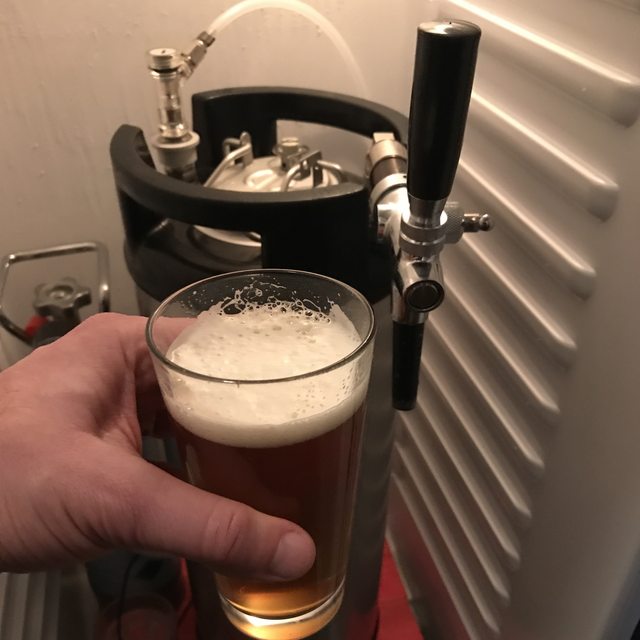